The Center for Entrepreneurship hosts events for alumni and students for continued learning and growth. 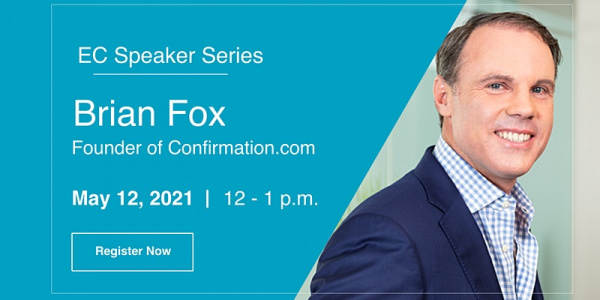 Hear from VP of Strategic Partnerships at Thomson Reuters President & Founder of Confirmation Brian Fox as he shares his entrepreneurial journey creating his Inc. 500 company Confirmation. Hear how he turned a career in audits into a company used by more than 16,000 accounting firms in 180+ countries across the world, and how he’s circling back to help other entrepreneurs coming up behind him.

Brian Fox, CPA, MBA, CGMA, President & Founder of Confirmation; Adjunct Professor at Vanderbilt University. He is the creator of Electronic Confirmations and received the first seven patents granted on electronic audit confirmations. Confirmation is now used by 4,000 Banks and by more than 16,000 accounting firms in 180+ countries. Brian has been recognized four times as one of the “Top 100 Most Influential People in Accounting”, is a five-time winner of the accounting profession’s “Top 40 Under 40 CPA in America” and has won an Entrepreneur of the Year award. Prior to Confirmation, Brian was in Dallas where he worked in audit for Ernst & Young LLP and in mergers and acquisitions for PriceWaterhouseCoopers.

Brian is a nationally recognized speaker on financial fraud and appeared on Fox Business News, CNBC, Bloomberg, and BNN to discuss global financial fraud. He has articles and quotes in the Financial Times, Forbes, Wall Street Journal, Fortune, New York Times, Compliance Week, CNBC, The CPA Journal, The CPA Technology Advisor, and many more. He sits on the Board and Advisory Board of several companies and is a member of the AICPA and The Tennessee Society of CPA’s.

Register for the virtual event here.